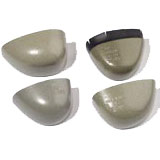 Hazards exist in every workplace in many different forms. The best way to protect employees is to control these hazards at the source using engineering, work practice and administrative controls. When these controls do not provide sufficient protection, proper personal protective equipment (PPE) must be used.

Protective footwear requirements are referenced in the Department of Labor’s Code of Federal Regulations (CFR) Title 29. General PPE requirements are given in the Occupational Safety and Health Administration’s (OSHA’s) standard 1910.132 and Foot Protection requirements are in 1910.136.

According to 29 CFR 1910.132, PPE must be used whenever an employer’s workplace hazard assessment determines that hazards that require PPE are present, or are likely to be present.

Per 29 CFR 1910.136(a), “Each affected employee shall wear protective footwear when working in areas where there is a danger of foot injuries due to falling or rolling objects, or objects piercing the sole, and where such employee’s feet are exposed to electrical hazards.” Appendix B to Subpart I identifies the following occupations for which foot protection should be routinely considered: “shipping and receiving clerks, stock clerks, carpenters, electricians, machinists, mechanics and repairers, plumbers, assemblers, drywall installers and lathers, packers, wrappers, craters, punch and stamping press operators, sawyers, welders, laborers, freight handlers, gardeners and grounds keepers, timber cutting and logging workers, stock handlers and warehouse laborers.”

On March 1, 2005, the ANSI Z41 reference was withdrawn and replaced by the ASTM Standards.

On September 9, 2009, OSHA issued an update to its PPE standards. The final rule went into effect in October 2009. This final rule revised the PPE sections of OSHA’s general industry, shipyard employment, longshoring and marine terminals standards regarding requirements for eye and face protective devices, and head and foot protection.

The revision updated the references in these regulations to recognize the three most recent editions of the applicable national consensus standards and allows employers to use PPE constructed in accordance with any of the three.

All footwear manufactured to the ASTM specification must be marked with the specific portion of the standard with which it complies. One shoe of each pair must be clearly and legibly marked (stitched in, stamped on, pressure sensitive label, etc.) on either the surface of the tongue, gusset, shaft or quarter lining. The marking must be enclosed in a rectangular border and a four-line format is suggested. Line four is used only when more than three sections of the standard applies to the footwear.

This line identifies the ASTM standard. It indicates that the protective footwear meets the performance requirements of ASTM F2413 issued in 2011.

Lines 3 and 4 are used to identify footwear made to offer protection from other specific types of hazards referenced in the standard. They are used to designate conductive (Cd) properties, electrical hazard resistance properties (EH), footwear designed to reduce the accumulation of excess static electricity (SD) and puncture resistance (PR).

Conductive (Cd) footwear is intended to provide protection for the wearer against hazards that may result from static electricity buildup and to help reduce the possibility of ignition of explosives or volatile chemicals. The footwear must facilitate electrical conductivity and the transfer of static electricity buildup from the body to the ground. The electrical resistance must range between zero and 500,000 ohms.

Electrical hazard (EH) footwear is manufactured with non-conductive, electrical shock-resistant soles and heels. The outsole is intended to provide a secondary source of electric shock-resistance protection to the wearer against the hazards from an incidental contact with live electrical circuits, electrically energized conductors, parts or apparatus. It must be capable of withstanding the application of 18,000 volts at 60 hertz for one minute with no current flow or leakage current in excess of one milliampere under dry conditions.

Static dissipative (SD) footwear is designed to provide protection against hazards that may exist due to excessively low footwear resistance, as well as maintain a sufficiently high level of resistance to reduce the possibility of electric shock. The footwear must have a lower limit of electrical resistance of 106 ohms and an upper limit of 108 ohms.

Puncture-resistant (PR) footwear is designed so that a puncture-resistant plate is positioned between the insole and outsole. It is an integral and permanent part of the footwear. Devices constructed of metal must pass the ASTM B117-11 Standard Practice for Operating Salt Spray (Fog Apparatus) corrosion resistance testing. The device must show no sign of corrosion after being exposed to a five percent salt solution for 24 hours. The puncture-resistant footwear must show no signs of cracking after being subjected to 1.5 million flexes and have a minimum puncture resistance of 270 pounds.

Any changes to the original components of safety toe footwear such as replacing or adding aftermarket footbeds/inserts could cause failure to any or all parts of the ASTM standard and the marking would be invalid.

While ASTM excludes add-on devices, it doesn’t necessarily mean they’re not acceptable to OSHA. This paradox exists because OSHA states in 1910.136(b)(2) “Protective footwear that the employer demonstrates is at least as effective as protective footwear that is constructed in accordance with one of the above consensus standards will be deemed to be in compliance with the requirements of this section.” This means that if an employer can provide documentation, such as testing data proving their add-on devices provide protection equivalent to any of the incorporated by reference performance standards, then the add-on devices are acceptable to OSHA. Most manufacturers of add-on devices have submitted their products to independent laboratories for testing. This data and its results can be obtained upon request.

Commonly Asked Questions
Q. What is a composite safety toe shoe?
A: As the name suggests, instead of steel, composite toe shoes have a type of composite material in them. These materials are usually a combination of plastic, Kevlar® and carbon fibers. Steel and other alloy materials are stronger than the composite materials. Because the composite materials are not quite as strong as the steel and other alloys, the composite toes have to be thicker and more bulbous. This limits the styles that can effectively use composite toes.
Q: When is footwear with impact and compression protection suggested for use?
A: Per Appendix B to Subpart I, safety shoes or boots with impact protection are suggested for carrying or handling materials such as packages, objects, parts or heavy tools, which could be dropped; and, for other activities where objects might fall onto the feet. Safety shoes or boots with compression protection are suggested for work activities involving skid trucks, around bulk rolls (such as paper rolls) and around heavy pipes, all of which could potentially roll over an employee’s feet.
Sources